Inspired by an episode of Cooking Channel’s show “My Grandmother’s Ravioli” Mr. Food It Yourself and I purchased a masala dabba– a traditional Indian spice box- a few months ago. However, we did not have all of the traditional spices to fill it. This had to be remedied, and what better time than now? The Polar Vortex is keeping the air in Central Massachusetts frigid and dry. Seasonal Affective Disorder is keeping my apathy gauge at 11. So this week we decided to get spicy!

Spices can be expensive. Just look at the prices the next time you’re at your local supermarket. So what’s a budget-conscious DIYeter to do? Skip the supermarket. Yes, it’s just that easy. Instead, check out an Indian or South Asian market in your area. Here is the web site for the one I went to: Patel Brothers. They have a bunch of locations, and also had all the spices missing from our dabba. 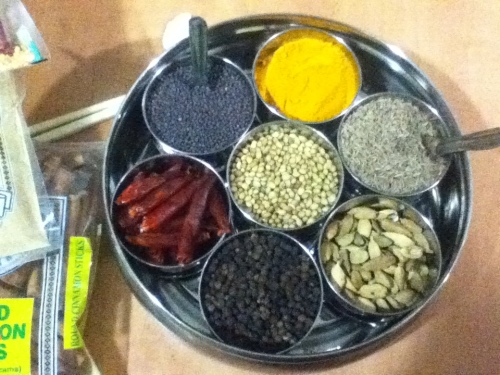 Take note, DIYeters- even if you don’t like exotic food it is a good idea to have a source for exotic spices! They appear in familiar recipes. Case in point: I bought turmeric and black mustard seeds this summer at Patel Brothers to use in pickle making.

I also picked up a few ingredients for traditional chai spice. They sell pre-mixed chai spice, several brands in fact, but we decided to try mixing up our own this time. Because we DIYet! Here is the recipe we used. 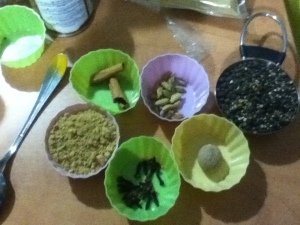 Here is what the spices look like before grinding (except the ginger which as you can see was already ground).

The ginger was already powdered, and we hit the nutmeg with a little grater. The rest went into an inexpensive coffee grinder. 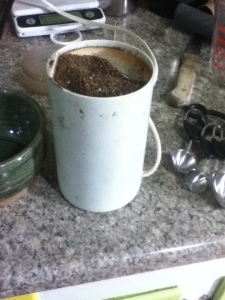 A grinder is a good investment if you’re into spices. Whole spices keep their flavor longer; grind just what you need at any given time for maximum spice impact.

A spoonful on top of some good black tea (you can get good tea at your local South Asian market also!), 4 minutes to brew, and add your favorite sweetener and lightener. I promise this will blow your mind if you have only ever had “chai tea” in the form of a super sugary concoction from the coffee shop. 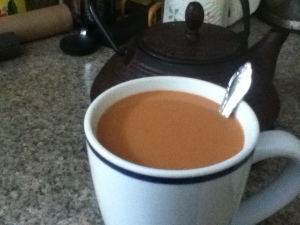 Not as peppery as I feared it might be- this is a beautifully balanced spice mix.

*not even available whole, price is for ground spice.

Impressive? I think so. So if the winter doldrums are hitting you try expanding the flavor profile of your DIYet. If you don’t live in an area with a large South Asian population, perhaps there is a Latin, African, Mediterranean, or Eastern European market near you. You will be both surprised and pleased by what you find, and possibly by how little you have to spend to give it a try!

← Who is Responsible for This?
Another One from the Stock Pot List- New York Griddle Breads →

One thought on “Spicy Not Pricey”