Girls Like Flours- Farinata! (No, That is Not an Italian Swear Word)

It is still wicked cold in central Massachusetts. Actually, it was dangerously cold in most of the USA this week. The next gardening season seems so far away on days when the high temperature is a single digit and wind chills are negative double digits. I am definitely planning 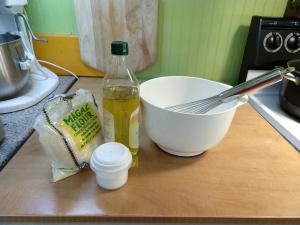 I found chickpea flour at my local Indian market. I’ve been using it to thicken curries, but I am excited to try baking with it.

my 2018 plantings, however. I’ll fill in those details when they have been finalized. Until then I’ll use my DIYet skills to make the Food It Yourself kitchen feel a little warmer.

This weekend I decided to try a street snack from the sunny Mediterranean- chickpea flatbread known as farinata or torta di ceci in Italy and socca in France.  There are similar breads made in South America, northern Africa, and India. The key ingredient is, not surprisingly, chickpea flour.

What is chickpea flour? Literally, it is just ground dried chickpeas. It has several aliases, though, including gram flour, besan, magaz, and garbanzo bean flour. How does it compare to whole wheat flour (the stuff I usually use for making bread)? I turned The USDA’s National Nutrient Database for Standard Reference. They have a convenient on-line search tool that lets you view nutrient standards for oodles of common food stuffs.

That is a lot to look at. The main points, as I see them, are that chickpea flour and whole wheat flour have similar caloric value. Chickpea flour has more fat and protein per volume. It is notably higher in potassium, folate, vitamin B6 and vitamin K; and lower in niacin and carbohydrate, than whole wheat flour.

What this table does not show is that chickpea flour tastes like chickpeas while wheat flour, even whole wheat, is considered neutral in flavor by most USAers.  In other words, if you do not like the flavor of chickpeas you will probably not like farinata. That is totally fine

This is my favorite pan.

though. There are plenty of awesome foods in the world. If you are a garbanzo fan, however, give besan a try.

Back to the kitchen and the fun of trying new foods! I found this simple recipe from the King Arthur Flour web site. I decided right off to leave out the olives not only because Mr. Food It Yourself is not a fan but also because I had no olives and it is too darn cold to go out.

I mixed the flour, salt, water and oil as instructed then walked away for two hours. I will note that other recipes I found for farinata/socca recommend six to twenty-four hour rest periods. Evidently, in some places, this flat bread is made with a lightly fermented batter. I may have to try that some time. Right now my kitchen is pretty chilly and I do not think I could get a fermentation going. Oh, so many reminders that I am not in fact in the southern Mediterranean.

Two hours later it was time to cook. I have neither a wood fired oven nor a copper-coated baking sheet, which are the traditional cooking appliances for socca.  So I got my electric oven pre-heated to the prescribed 500˚F, then oiled up my trusty Big Old Cast Iron Skillet. 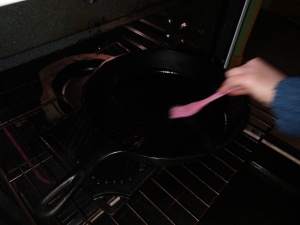 In went the batter. I let it bake for 12 minutes then moved the oven rack to finish for another five minutes under the broiler.

And here it is- my first farinata.

The smell alone was worth it.

I thought it was very good. There is a definite chickpea flavor which I thought went very well with the rosemary. I thought the texture was good, too. Mr. Food It Yourself found it too dry for snacking on as made, but admitted it might be good with other toppings. Well, we will have to try that.  The biggest problem I had with this recipe is that the high temperature of the oven seems to have created a lot of smoke. I had to re-set my kitchen smoke alarm multiple times during the cooking process. (Do not misunderstand me. We should all have functioning smoke alarms in our kitchens!)

I am very happy that I tried playing around with gram/besan/chickpea/garbanzo bean flour. Nibbling a wedge of farinata does make me feel a little less frozen on this single-digit day. There are plenty of other applications for chickpea flour- fritters, noodles even! What ingredients are you planning to play with in 2018? Share in the comments!

One thought on “Girls Like Flours- Farinata! (No, That is Not an Italian Swear Word)”