There is a chill in the air that the sun just can’t cut and the leaves are a little more colorful every day. Yes, it is soup season in the Bay State. There is no shame in buying soup. I do it myself now and again. However any DIYeter, no matter how novice a cook, can make the best kind of soup- homemade. The only hard to find thing soups often need, at least in this house, is time. I work two jobs. Mr. Food It Yourself works odd hours. Where do we find the time? Simple- we make

I used my noodle for this picture.

I work at a local independently owned and operated hardware store. I usually have to work Sundays. So, on this particular Sunday, I got up a little earlier than usual and got it all started. I sweated the onions. I added roughly chopped celery and carrots and a few sprigs of herbs. 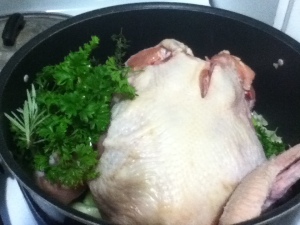 The chicken I selected is from a local farmer who is also my husband’s boss. The chicken grew up on Woodstock Sustainable Farms. These people are serious about chicken, and about good food in general.

Next, the pot needed water and a long simmer. But the people of Central Massachusetts needed paint mixed and screens repaired, so I left the pot in the fridge and headed to work.

When he woke up a while later, Mr. Food It Yourself added the water and set the pot to simmer. There was no hurry- the first few steps were done. He poked at it every once in a while. When I got home, I removed the solids from the broth and, after a little cool down, skimmed the fat off the broth and cut up the meat.

If you could only smell this…

Meanwhile, Mr. Food It Yourself chopped some fresh veggies for the final dish. Another little simmer and some alphabet pasta later and- 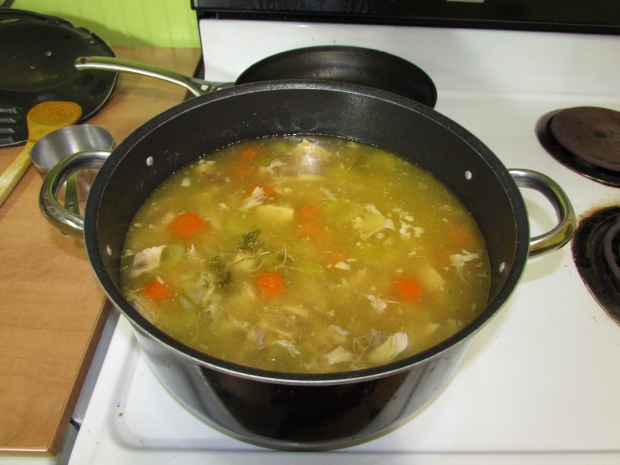 Until you try soup made from scratch you cannot even imagine how amazing it is. We had a lot of left overs too, so our team work will go extra far! Ever have leftovers with a can? Didn’t think so.

I know I keep harping on getting other people to help you with your DIYet. There is a reason for that. We all have a million and two things to do every day. Sharing food preparation with others makes homemade meals easier. So give it a try! Plan out who will peel, who will chop, who will monitor the stove and who will set the table. It is absolutely worth it.

Category : Cook it yourself, Get it local
Tags : chicken, cooking, DIYet, food, soup

← Mild Mannered Foodstuffs
Toe-may-toe, Toe-mah-toe, This is It. I Mean It! →

7 thoughts on “Soup, Our Food”